Mounting Kryptonite Locks For discussions about bikes and equipment. I have a makeshift solution: However this rattles around a lot and I occasionally smack my legs into it. I’ve tried using the EZ Mount system that came with my lock but it’s worth than useless. See its Amazon page to prove it’s not just me being an idiot.

So, are there any alternatives? Why isn’t yours working? It does rattle a lot though but that’s just the lock itself. 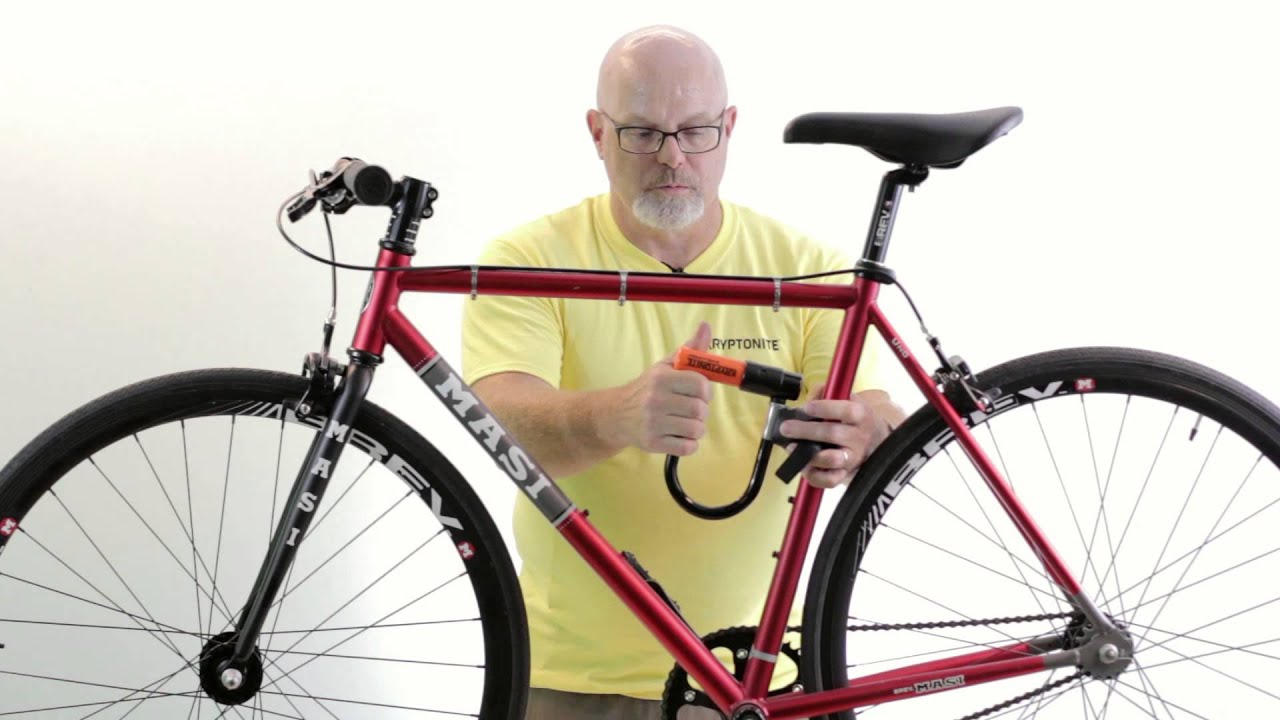 My frame has oversize coke can aluminium tubing and most of the tubes are not circular cross krypotnite. I fitted it to the pannier rack instead.

The lock mount won’t easily fit to a rack either, but found that by cutting up the carcase of an old tyre and wrapping a piece of the tread around bits of the rack I could hold the lock mount in place without it cutting the tape holding the mount in place. Some pictures might make it clearer: You do not have the required permissions to view the insteuctions attached to this post. I do own a rack but don’t like having it attached when I’m just using my bike as a commuter.

It goes back on for tours. Schnell — I’m simply not able to pull the fastening tight enough. Users’ comments on Amazon seem to confirm my experience. I actually can’t imagine how it would rattle if one were to get it nice and snug, since the fit between the shackle on the lock and the bracket is very tight.

My own lock is a Kryptonite but a cheaper version. The bracket which looks like the same one serves the purpose very well – snug fit, no rattle, easy to stow the lock and remove it. Anyone remember the helms cartoon when big D locks first came into use? Smug chap with a really huge lock in a trailer.

Seems to be very badly made with huge tolerances – mine’s far too tight around the lock, whereas others say it’s too loose.

I had to use two hands to pull the lock out once releasing the catch.

After three uses, the plastic cracked and fell to bits I now use a pair of brackets designed to hold a torch on the handlebars – they’ve got chunky bits of rubber which hold the lock secure, although it does swing around a bit. Take up most of the slack by sliding the toothed section so far, until you’re left with a gap just wide enough for the screw on the other side to bridge.

Then tighten this screw to achieve a firm grip on the tubing. The lock catch can be be a bit tight. I used graphite from an artist’s pencil as a lube.

Any other bodges are liable to be just as awkward IMO; D locks are never going to fit nicely on a bike frame, although I had my mini Evo attached to the seat stay, which fitted quite neatly. These days I just attach it to the pannier instructionns and when I’m out in the sticks I just use a mini cable lock.

The bracket shouldn’t be loose. Braciet pictures worth words each. The coat hanger is only to demonstrate how the top loop is secured; the other end, and both ends of the lower loop are fixed in place. Cheap, and weighs 15gm, including the extra, flat washer to stop the loop from slipping off.

Might you modify the idea for your particular frame? Respect to soton who uses a coat hanger. I use pliers to pull the ratcheted strip through before tightening it up. A shortcut has to be a challenge, otherwise it would just be the way.

No situation is so dire that panic cannot make it worse. There are two kinds of people in this world: If I needed one at both ends, I’d consider buying two.

U locks are heavy and I paid a lot of money for light bike! If not, an old bit of shoeleather or inner tube strategically applied is good to eliminate rattles. I already use the version that holds items at a right angle for my bike light and that works really well being very secure but easily removed.