Good day all, I need some help with my Arboga U mill/drill press. I got a kind of stuck in overhauling my mill. I figured out, that the worm. Hi guys, I’m considering buying an Arboga U mill/drill as a small second milling machine in my workshop and would like to hear some real. Machinery Scandinavia AB. Tungatan 10, 83 Rosenfors, Sweden tel +46 , fax +46

Last Jump to page: Right then been a very very very quiet on the build front for a good while now for very good reason. To remedy this i thought i would kick off with what the immediate future plans are. I need to downsize my workshop a bit to move stuff out of the house to make way for our new arrival no not the new mill?

To do this i took the decision to sell the Bridgeport as that take the most room up and if need be i have access to another. It really pains me as that is my favorite toy: Before i have had chance to list her i got qrboga chance of an Arboga, great machine but does come with some challenges.

It is in great shape and now in pieces on my workshop floor ready for when i can start. Spindle has an MT3 taper with a locking ring around the base as there is no way y2508 put a draw bar because of the gearing above my locking nut M62x1. The drill chuck is stuck in the taper looks like it has never been removed since new 4. Table is not massive Good points: Very sturdy machine and knocks spots off most medium size mills, even modern ones 2. Big enough for most things arboha play around with 3.

Everything is metric 4. Takes up very little room 5. Lots of space to hide anything and everything 7. Quill has mm of movement which means i can run that as my Z and leave the column manual for different job sizes Plans: Strip it down 2.

Clean and repaint machine 3. Make a new nut for the M62 thread In case i need anything MT3 4. Pull the motor windings that are built u250 the machine and retrofit the guts from a 3phase 1HP rpm doner. I will loose the two motor speeds but will get this back from the VFD control and will still have two mechanical speeds to play with. Use 20×5 ballscrews on the X and Y.

Still not made my mind up about the Z? May need to make some new gears for the head but until i get it running will not know. The ones i may need to replace will be made out of tufnol. This will keep that head nice and quiet. Sourced new switches and things 8.

Have a 3phase motor only rpm to test theory of swapping over gubbins. This is not going to be a quick project as my new son is due home next week after being born 9.

This has taken most of my time up as i have been left to look after the other kids and work full time. In the end i may loose my bridgeport which i still need to sell but will have a CNC mill. Lets see if i can be better at updating this log with more detail and pics than before: Don’t bother, hit and miss whether you will get run out from just a thread and no register. 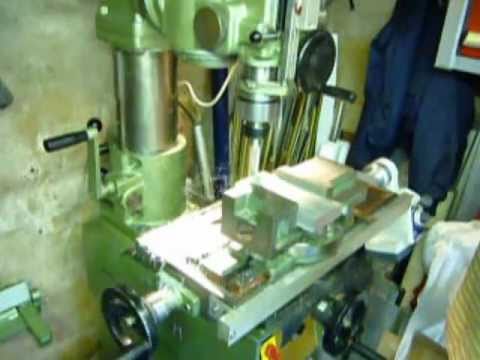 Instead get a standard MT3 ER32 collet chuck and machine a groove in it with carbide tooling and fit a circlip to hold the washer and the M62 nut. BTW I have a short threaded test piece with the Arboga thread on it, OK if uu2508 want to borrow it or if you are dead stuck I can make you a threaded sleeve. You could always buy a v 3 phase VFD feed it v single phase from a yellow brick wired backwards and the earth centre tapping removed and use this as v in y2508 de-rated.

You can pick v input vfd’s quite cheap. Hi John I did look at the options for the motor similar to what you are arrboga but i like things to be neat and tidy.

The casting on the head fits a standard frame so should not be an issue swapping the guts over from a doner motor. I may even find that i can pull some more wires out on the existing split the coils which only has 6 coming out? As for the tooling like you say just mod standard arbors but will still have a go my way as it will make things nice and easy, with an er chuck and a facing mill should not need much else.

Back to the motor if all else fails i already decided just to chop the lot off the top and fit a motor on top with a pulley going to the spindle. I can then fit a draw bar: John thanks for the offer of the test piece but i should be ok on that front.

Look at bottom pic and you will see what i mean Originally Posted by 2e0poz. The drill chuck is stuck in the taper looks like it has never been removed since new. Should be fine robin as it has a knockout in the side of the quill I’ve promised myself some time next week so will start the clean up and get some pics up of how she looks now. Come up with very dark grey colour almost black and maybe a hint of green here and there?

I know painting is not the be all and all but better to get that done whilst i have a chance or like everything else once it is together it will stay that way I really do need to clean up the shop though and start getting rid of the rubbish Still waiting on the screws to arrive for this one and still mulling ideas about the screw needed for the Z’d if i go down that route.

Looking at it though i may be easier to replace the pinion gear that is there and work some way of tensioning it to alleviate the backlash?

Did you get much further I am just going to start a similar conversion on my Arboga and would love to hear of your progress Geoff Cape Town. Hi Geoff the short answer is yes and it is not the easiest conversion on the planet if you want to do it right. There is not a lot of space for 20mm ballscrews under that table. I’ve dumped the gearbox on top and going for two speed direct drive on VFD. Expect to do a lot of machining of the table.

Not really a job unless you have access to another mill. I have had to build a complete new inner spindle to give tool release it will accept R8 as well. The project has been on hold for a while due to other circumstances, i will get back to this thread properly as soon as i can. About time for an update and a drip feed of pics. Tonight I finished rebuilding the spindle for this machine in readiness for the Poly v pulleys i need to make. I dumped the original inner and used an old spindle from a lever lock collet closer.

I re machined it to take new bearings and machined it to use R8 tooling before you ask why? I ended up with a 28mm id bearing on the top and needed a lock nut, apparently they don’t do them?

So i ordered a 28mm arbpga 1. It locks lovely The next job is to make the pulleys and machine the rest of the spindle so it all looks good. Sx3 mill conversion By deisel in forum Conversion Build Logs. Saying hello, about to start a mill conversion.

By irgonomics in forum New Member Introductions. Mill conversion to cnc By wolsey in forum Arbogx Discussion. Bookmarks Bookmarks Digg del. Searching for help, getting a Cutting ballscrews to length the New guy trying to wrap his head Need some of these done. RFQ – large steel part for cost Partial Set of Ox Router Aluminium